Masks are optional. We understand that some people may not agree, feel safe, or feel ready to lift these restrictions. We support you and encourage you to continue with whatever level of safety precautions fits your needs. If you would like to attend via Zoom, please complete the Contact Us form to request access instructions.

ABOUT WHEAT RIDGE CONGREGATION: THE UNITED CHURCH OF CHRIST

The Wheat Ridge Congregational Church, United Church of Christ, is one of the oldest continuously worshiping churches in metro Denver, having been organized on May 20, 1882. The people first met in the Webber home at 2535 Federal Boulevard. Within six months “Boulevard Congregational Church” was conducting services in a debt-free brick building located on the northwest corner of West 26th and Federal.

In 1956 the church moved to its present site at 6310 West 29th Avenue in Wheat Ridge. The building in which we now worship was completed in 1963.

From the beginning the church identified itself a part of the Congregationalist denomination, which traces its North American roots to the British Congregationalists who came to New England on the Mayflower in 1620.

Over the years, our congregation has been known for the progressive tone of its theology and for its involvement in social concerns.

Our church is a member of the Metropolitan Denver Association of The United Church of Christ – a denomination formed by the merger on June 25, 1957, between the Congregational Christian Church and the Evangelical and Reformed Church. As a denomination, the UCC is known for several things, including:

No. Most congregations that are part of the Church of Christ denomination follow a very strict interpretation of the Bible. Some do not even allow pianos or organs in the church since these instruments are not mentioned in Scripture. In contrast, the United Church of Christ has a somewhat liberal or open-minded reputation. The United Church of Christ was formed in 1957 by a merger of the Congregational Christian and the Evangelical and Reformed (“E & R”) denominations. The national offices of the UCC are in Cleveland, Ohio. Congregations are self-governing. There is no official doctrine that all UCC congregations must follow. Some congregations might be thought of as conservative, but a larger number probably view themselves as moderate or liberal.

What Do You Mean By “Liberal”?

The word liberal when used by itself is imprecise. Liberal Christianity should be distinguished from other forms of liberalism such as liberal philosophy, liberal economics, liberal politics, liberal morality, and so forth. In general, for Roman Catholics “liberalism” means that the teachings of the Vatican (the Pope) are given less authority. For Protestants, “liberalism” usually means that the Bible is interpreted less strictly or less literally. Christian liberalism also tends to affirm (a) that science and religion are compatible; (b) that there is no one correct path to “salvation” which may be stipulated for all people; and (c) that people of faith should be vitally involved in social in issues such as peace, justice, respect for human rights, and environmentalism.

The Protestant Reformation began on October 31, 1517, when a German monk named Martin Luther published opposition to certain teachings of the Vatican. Luther was excommunicated (expelled) from the Catholic Church. He then initiated the movement that we now call Lutheranism. Other branches of Protestantism that arose during the 1500s are the Reformed churches, including Presbyterianism, and the Anglican churches — the Church of England and, in other countries, the Episcopal churches. The Congregationalists were an offspring from the Church of England. The E&R denomination emerged from the German-speaking Reformed churches. The UCC was created in 1957 from a merger of the Congregational Christian denomination and the Evangelical and Reformed denomination.

What are the Main Features of the United Church of Christ?

The UCC has no mandatory doctrinal statement or required creed. The Bible is an essential point of reference, but it is not viewed as a perfect moral rulebook. Each congregation governs its own affairs. All ordained ministers must hold bachelor’s and Master of Divinity degrees and must meet other professional and religious standards. There are no bishops or officials who control the deployment of clergy. Before the 1957 merger which formed the UCC, the Wheat Ridge Congregation was a member of the Congregational denomination. The Congregationalists first appeared in England during the 1500s. They were persecuted harshly by the Church of England because they rejected the authority of bishops or other church hierarchy. They fled first to Holland and then to America, settling mainly in New England as “the Pilgrims.” From the beginning the Congregationalists had a love of learning and founded colleges such as Harvard and Yale.

In the UCC, Do You Baptize Infants?

Yes. We believe that God’s love and grace operate in our lives even when we may not be aware of it. Certainly, we do not have to have a complete mental comprehension of everything God does in order for God’s influence to be effective. We baptize infants as a way of recognizing the power of God’s grace in each human life, and also as a sign of their acceptance into the church and as an expression of the congregation’s support for the child and her or his parents and family. We also baptize adults. The practice of infant baptism, which we endorse, stands in contrast to the baptism for “believers only” practiced by Baptists and certain other denominations who teach that a person must be old enough to decide for him- or herself in order to be baptized.

Why and How Often Do You Have Communion or “the Lord’s Supper”?

Protestants do not generally believe, as Catholics do, that the communion elements of bread and wine actually become or contain the physical presence of Christ. For Protestants, the bread and wine are more often regarded as reminders or a memorial of the suffering love of Christ, who gave his life rather than abandoning the mission to which he was called. At Wheat Ridge we offer Communion on the first Sunday of every even-numbered month, and on other special occasions.

What Does the UCC Say You Have to Believe or Do in Order to Be “Saved”?

The UCC has no single teaching about salvation. In fact, many members of the UCC are probably very uncomfortable with the fundamentalist view that some people are “saved” and will “go to heaven” while others are “lost” and will “go to hell.” This idea rigidly divides human beings into two opposing groups and encourages a type of exclusivism or elitism in churches. We believe that any person who sincerely searches for God is on the right track. Each individual has a personal history and personal spiritual needs which must be met uniquely. Some may feel the need to be “born again,” while others may not. The Apostle Paul himself seems to recognize this when he writes, “work out your own salvation in fear and trembling, for it is God who is at work in you” (Philippians 2:12-13).

What’s the Big Deal in the UCC About Women and Men Having Equal Authority?

This wouldn’t have to be a “big deal” except for the fact that there are so many Christian denominations that don’t grant equal authority to women. The Catholic Church does not ordain women to the priesthood, and many literal-minded Protestant groups will not allow women even to hold office or to teach classes when men are present. This is based on an unnecessarily strict interpretation of passages such as I Timothy 2:8-15. In the UCC we are proud that women are active in every aspect of church leadership, including ordained ministry.

Why Does Your Church Care About the Subject of “Religion and Science”?

Today, sadly, there is a widespread recurrence of the fundamentalist Christians’ old opposition to science, repudiating the biological theory of evolution and advocating a literalistic interpretation of the creation narratives found in Genesis 1-3. In the UCC we tend to interpret the Genesis stories as valuable myths that contain moral and theological truth but are not meant as a substitute for science. The fundamentalists also attach a distinctive importance to a supernaturalistic interpretation of the Bible’s miracle stories. Most of the members of the Wheat Ridge Congregation do not support these fundamentalist ideas, believing instead in a rational approach to faith that can be integrated with other fields of study. We believe that God is present in all forms of truth and that modern science has, in general, brought about great improvements in human well-being which support and do not detract from our spiritual life.

What Does it Mean That the Wheat Ridge UCC is “Open and Affirming”?

After studying the issue for almost two years, on June 6, 2004, the congregation voted by a four-to-one majority in favor of welcoming gays and lesbians into full membership. In response to persons who say that this contradicts Scripture, it is important to recognize that there are a great many teachings in the Bible that are no longer relevant for contemporary life, and that, in the entire Bible, homosexuality is mentioned in only a few verses whose meaning is often obscure. In the UCC we affirm that “God is still speaking,” that new revelation is being discovered continually, and that God calls us to be an inclusive, welcoming church. See our Open and Affirming page for a copy of our Open and Affirming Resolution.

Thank you for considering giving to the Wheat Ridge Congregational Church of the United Church of Christ. Your kindness to our community is much appreciated! Please click on the GIVE TO WRCC button to process your donation. 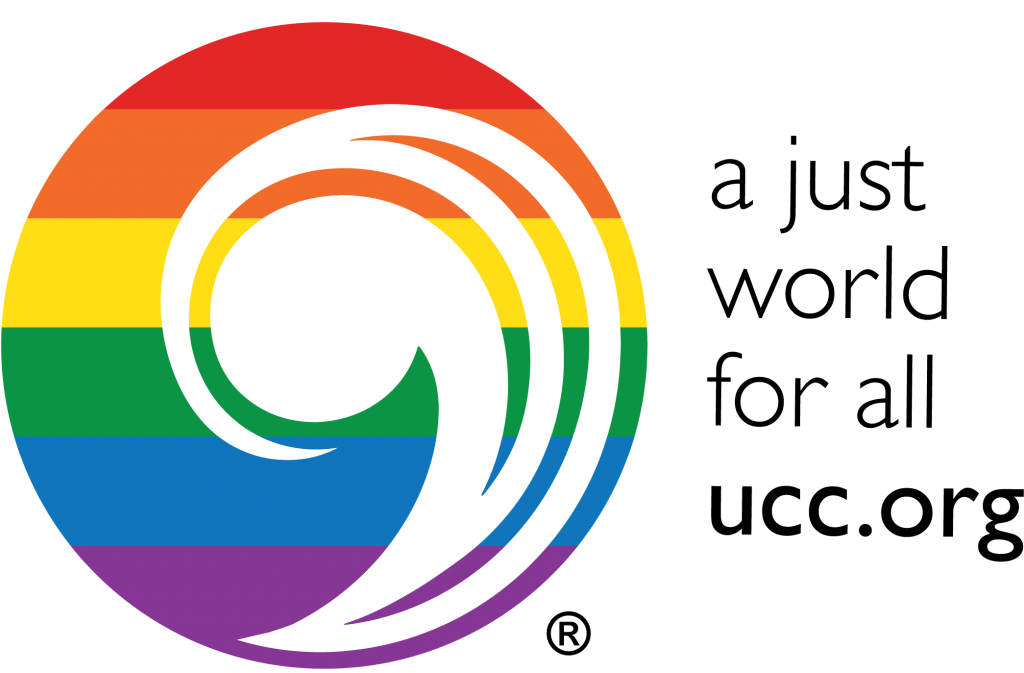 WORSHIP WITH US EVERY SUNDAY AT 10 AM

Adult Study Hour meets at 9 AM.
Children’s Time is at 10:15 AM.
Cookies, snacks and coffee served at 11 AM.
Our music program is directed by Rosanna Rains.